Dinner parties always go one of two ways for me: I’ll either lose self control and find myself ranting about the market, as I do on the Real Money Show; other times, I get “the look” from my wife and switch gears to “keeping it light”. If you want to impress your guests at your next soirée while still keeping it breezy, I recommend that you watch Bill Still’s documentary ‘The Secret of Oz‘. His in-depth analysis of L. Frank Baum’s book ‘The Wizard of Oz’ shows how this story has always been an allegory for our monetary system. Who knew? 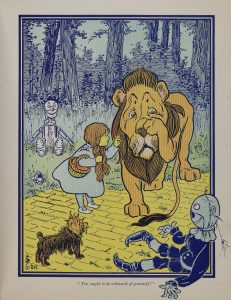 Consider this: the “yellow brick road” is the path to the gold standard, “The Emerald City” is the destination of Washington, and Dorothy’s slippers? Well… we all recall that in the movie Dorothy’s shoes were ruby, but in the book they were in fact silver. These are some of the powerful images in the children’s tale that allude to the issues facing the global economy, and also describe how the powers that be control our monetary system. Let’s dive into Dorothy’s friends for a minute, who are much more political than we realize today. The scarecrow stands in for the farmer of the west who, are viewed by politicians to be simple, but in fact understand the economy better than most; the tin man is the symbol for the factory worker who needs liquidity/more money in the system; then there was the “cowardly lion” who portrays William Jennings Bryan, a politician of the late 19th century in favour of the silver movement. After suffering a political loss Bryan backed away from the movement and was actually seen as a “coward”. Silver at the time was not issued by banks and was/is not considered to be a part of the gold standard, but was a vehicle to issue debt-free money in the late 19th century (see Coinage Act of 1873). As Dorothy and friends head towards The Emerald City, they are really, in fact, marching towards Washington. Along the way they encounter the wicked witch of the east and west who want control over Dorothy’s *silver* shoes. Who are these sisters? One could argue that the wicked witch of the west could be the Rockefeller interest, and that the wicked witch of the east could be J.P. Morgan –both conspiring for the power to create money.

It is interesting to note that The Gold Standard Act was passed in 1900, the same year the book was published and with it the silver issue vanished. Coincidence? As Dorothy, scarecrow, tin man, and the lion reach The Emerald City to finally meet the Wizard of Oz (“ounce” abbreviated to “oz”), they realize that the wizard is actually without any real power. Doesn’t this remind you of every Fed Chairman? As we know, The Fed is a private banking system whose interests lie in control of the money supply, enacted by Congress; an institution powered by the people. Through struggle and persistence, Dorothy realizes that she always had the power.

The Secret of Oz shows us how the systems in place have always controlled money throughout the ages. We’ve seen it across history and watched money oscillate between between the people and the bankers. Bill Still presents to us that prosperity lies whenever it is in the hands of the people, like Lincoln creating the Greenback. When the bankers are dangerously in control, there is hardship and loss for the masses. I’m happy to say that thanks to Bill Still and L. Frank Baum, I’ve become quite popular at dinner parties… or perhaps just tolerable.